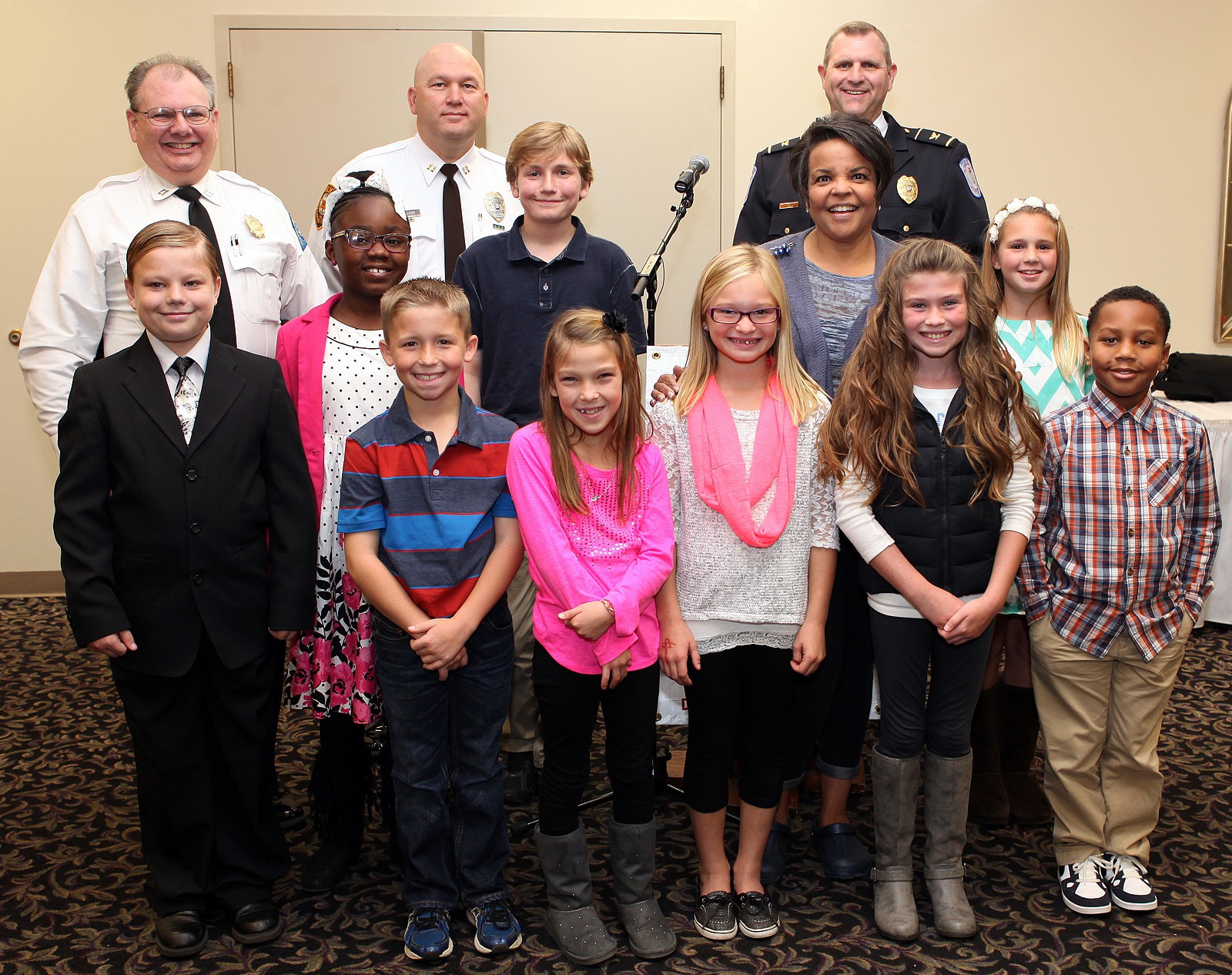 Jonathan was at school when he was out by the school gate. While he was there he spotted something on the ground, a jackpot! Jonathan found a $100 bill outside! He could have kept it, and no one would have known. But Jonathan did the right thing and turned it right in to school. So today we honor Jonathan Caldwell for doing the right thing!

Demond was on his way to school when he came upon a car accident. Demond noticed one of the involved people was Dr. Taylor, a teacher at his school. He also noticed oil or gas was leaking from her car, and he let her and the other person know what was happening. He then ran all the way to Walbridge School and notified the principal, Dr. Lewis, so the police and fire departments could be called to help. So today we are honoring Demond Wright for doing the right thing.

Thanks to his concern and caring ways, he was able to get help to a teacher and another citizen. Tezell Jefferson who nominated him stated, “Demond’s quick thinking helped keep everyone safe. That’s why I feel that Demond deserves a Do The Right Thing Award!” We agree, Demond! Congratulations!

Allison is an up-stander! When there were several incidences of bullying occurring on the playground at school, Allison noticed. The bullying was targeting a particular student, and Allison broke away from her friends to tell them to stop. But rather than listen, her friends continued to not only taunt the victim, but Allison as well. Allison continued to tell them that what they were doing was wrong, and when it still didn’t stop, Allison spoke up and told a teacher which lead to a positive outcome. So today we are honoring Allison Pearia for doing the right thing!

Thanks to her bravery and compassion, a fellow student benefits. Jaimyn Fairchild who nominated Allison stated, “I am nominating Allison for doing the right thing even when it was not the popular or easy choice. Allison did not cave in to the pressure from her peers, but instead continued to tell them what they were doing was wrong!” It sounds like you are amazing Allison, and we are so proud! Congratulations!

Darrion was enjoying the bus ride to school when he noticed a problem. A preschooler was choking on an object and Darrion was just the one to help. Darrion first tried hitting the younger student on the back, but when that didn’t dislodge the object, Darrion started to do the Heimlich Maneuver. Darrion was able to dislodge the object and thankfully the preschooler was just fine! So today we honor Darrion Love for doing the right thing!

Thanks to his attentiveness and quick action, a preschooler is safe. Ms. Marla Finley who nominated him stated, “Darrion was great. He jumped into action and saved the preschooler. We are so grateful for Darrion’s heroic actions!” We are super proud of you Darrion; you really are a hero! Congratulations!

Avery had a birthday and instead of keeping all the goodies and presents she received for herself, she donated all the money and gifts to the children and babies at Children’s Hospital. Avery said she already has everything she needs or wants, so she decided to do this on her own and wanted to help those who are not as lucky as she is. Avery has also spent several hours making rainbow loom bracelets and sold them at a garage sale, where she raised $400 which she donated to the local humane society! So today we honor Avery Hesseldenz for doing the right thing!

Thanks to her kindness and thoughtfulness, others are directly benefiting. Mrs. Stacey Rank, who nominated her stated, “Avery sets a great example for other to follow not only in the classroom but in the community as well. She is always thinking of new ways to help others. She has done an exceptional job and is a great asset to our school and community.” You really did a great job, Avery! Congratulations!

Gavin is a wonderful son, and an amazing brother. Gavin has a brother Gaige who has autism, and Gavin is great at helping his mother with him. Gavin’s father is in the military and when he deploys that can create some challenges for Gavin and Gaige’s mom, since Gaige has to be monitored constantly. Gavin is more than willing to help out, from calming Gaige down when others have been unsuccessful, to keeping an eye on him when mom can’t. Gavin has never once complained or expected something extra for helping with his brother, and has taken on responsibilities that even many adults could not handle. So today we are honoring Gavin Green for doing the right thing!

Thanks to his responsible ways and concern, his brother is safe and his mom knows she has someone to help her out. Mrs. Nicole Green who nominated Gavin stated, “Gavin is a Godsend and I am grateful every day that he is the kind-hearted, loving kid who has taken on such a huge responsibility without even second guessing it. I would not be able to survive without him!” We are so proud of you Gavin! Congratulations!

Carlee and Macy are friends, and they used that friendship to create something special: rubber band bracelets! I know, lots of people make them, but these two then sold the bracelets they made to raise money for the Cardinal Glennon NICU. The two then organized a hat day at their school and all together raised over $500! So today we are honoring Macy English and Carlee Steinnerd for doing the right thing!

Thanks to their thoughtful and kind actions, other children benefit. Ms. Lori Steinnerd who nominated them stated, “Carlee and Macy wanted to put the needs of others before their own. They also realized many kids are not as fortunate as them and don’t get to have the same childhood experiences”. We are so proud of you Macey and Carlee. What an awesome job!

Brianna Dallas is a great student and a great citizen. Brianna observed another student being treated differently because of the student’s inability to have clean uniforms on a daily basis. Brianna spoke with her mom about helping the student and purchased new uniforms. Brianna sneaked the clothes in her book bag and made sure no one saw her give the new uniforms to her classmate. So today, we honor Brianna Dallas for doing the right thing!

Thanks to her compassion and kindness, another student benefited from her actions. Mrs. Gloria Richardson who nominated Brianna stated, “Brianna donated the uniforms without my knowledge, I found out accidentally through Brianna’s mother. Brianna’s kindness doesn’t end with that student. She consistently asks to assist other students in our class who have difficulty understanding a lesson and routinely gives up her recess to help teachers in their classrooms. Brianna is an outstanding student as well as a special little girl!” You are very special Brianna! Keep up the good work.

Bryant-Michael is an incredible helper at his school. Every day he volunteers to take the cart with the walkie-talkies to the office after recess as well as plugging them in. He also locks up the locker that the balls are kept in. Bryant-Michael is diligent and never forgets to follow through with these tasks. Bryant-Michael is also kind and respectful to his teachers and his classmates, making his school even better. So today we are honoring Bryant-Michael Chatman for doing the right thing!

Thanks to his responsible actions and dedication, he helps his school on a daily basis. Ms. Sandy Weis who nominated him stated “Since I have been at Parkwood, I have never experienced a student in third grade who takes this job seriously. Bryant-Michael has proven that he is a very responsible third grader. He is a role model for all the students at Parkwood.” We certainly agree Bryant-Michael. Keep it up!

Queen of Peace
Diocese of Belleville

Dylan has always been a fan of Blues Hockey and specifically of Keith Tkachuk. Dylan plays hockey; he even wakes up and is going before six in the morning so he can practice with his team. Last season while the Blues were in the finals, Dylan was at Ball Park Village and he spotted a Blues hockey ticket on the sidewalk. The ticket was for that night’s game, and all he had to do was walk right in with it. Dylan wanted to do the right thing and give the ticket to the owner, but how do you do that when you don’t know who it belongs to? Dylan was lucky, he noticed a man looking around on the ground like he lost something, and he did, he lost the ticket Dylan found. When asked if he found one, Dylan quickly answered yes and returned the ticket to its rightful owner. So today we are honoring Dylan Ysursa for doing the right thing!

Thanks to his kindness and honesty, a fellow Blues fan was able to enjoy the game. Ms. Connie Barre, who nominated Dylan stated, “Dylan knew his dad was at the playoff game and it was possible to use the ticket and locate his dad to watch the game. But Dylan knew the right thing to do. His dream of seeing a Blues playoff game vanished but he continues to be an honest young boy who knows how to make wise choices in life. And that is why Dylan is being nominated for Doing the Right Thing!” We agree Dylan; you made a wise choice, and we are very proud of you!