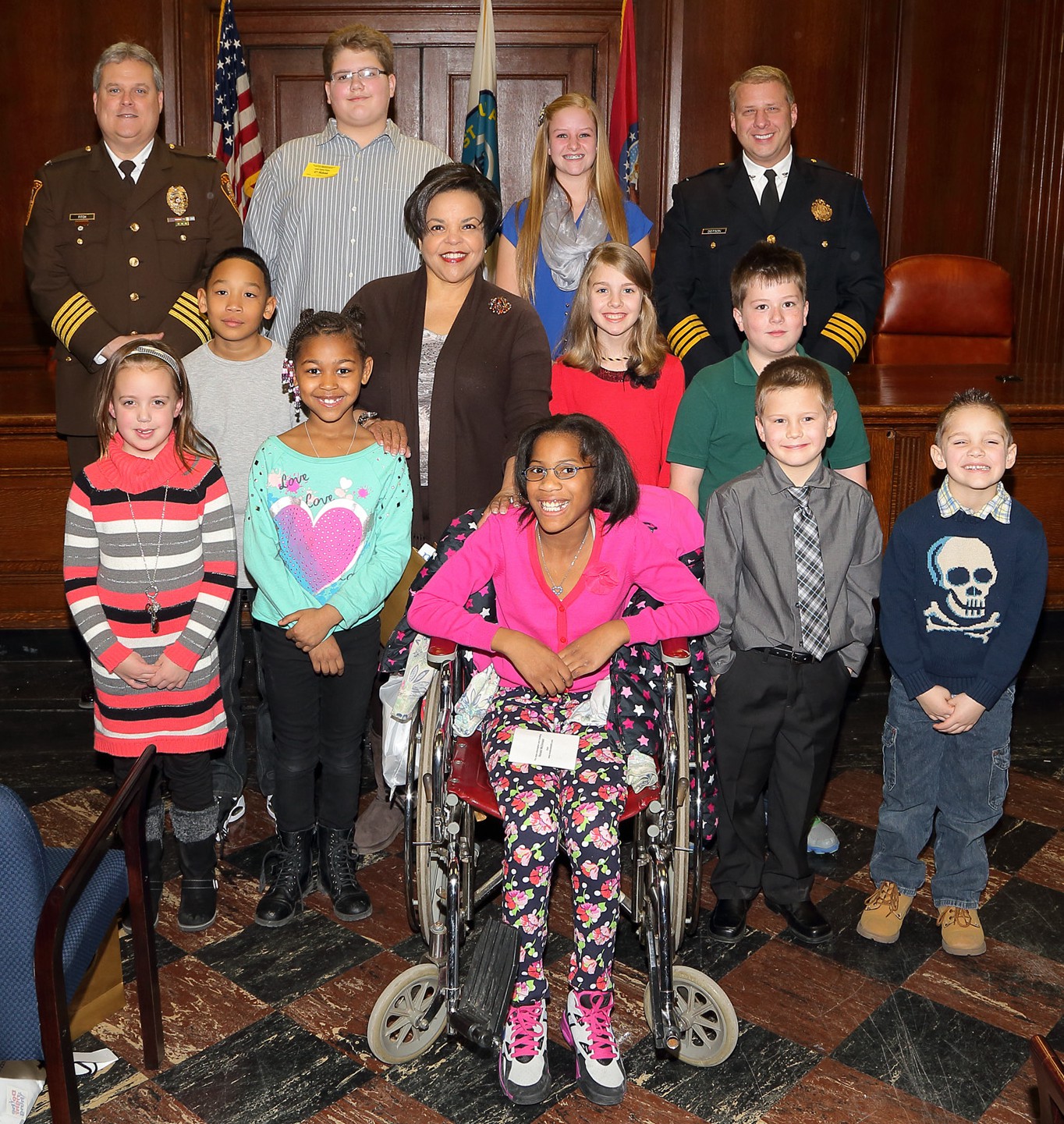 Lea was having a great time playing on the playground at school with friends when the whistle blew and it was time to line up. Lea noticed that another student did not line up and remained outside. Lea, being super-responsible, told the teacher that the student, who has special needs, was outside in the playhouse on the “big playground”. The student was located and returned to the classroom safely, all because of Lea!

So today we honor Lea Hayes for doing the right thing. Thanks to her being responsible and caring, a fellow student is safe. Marsha Numi who nominated her stated, “Lea was so responsible, she informed the teacher, who quickly brought the young girl inside. I am so very proud of her for helping make a fellow student, who is nonverbal, safe.” Great job, Lea! We are so proud of you.

Hannah stands up for what she believes in, she stands up and helps those who are overlooked, and she does not let anyone influence her to do otherwise. Hannah not only stays away from doing things that are illegal or inappropriate, she also gives positive guidance to those who do in the hopes they will listen to her. With her inspiring character, Hannah has grown into a very confident and positive young lady in the eighth grade, to whom every little girl can look up.

So today we honor Hannah Parke for doing the right thing. Thanks to her kindness and guidance, Hannah has made a true difference at her school. Mrs. Amanda Lucash, who was her first grade teacher at Smithton and nominated her stated, “I want Hannah to know that as a teacher, I see the good she pours out to her fellow classmates, and that she is making a difference. I know Hannah will continue to “Do the Right Thing” as she enters into high school. I am so proud of Hannah, she truly deserves this recognition.” We think so too, Hannah—great job!

Jacob started off the school year at Westhaven a little roughly. His behavior and homework did not reflect a responsible sixth grader. However in one word “WOW” has it changed! Jacob turns in his homework on time, he is alert and ready to learn, participates in class discussions, and works patiently in partner work. Jacob has even shown courage by taking on challenging problems and not being afraid to speak up and answer, even if he might have the chance of being incorrect!

So today we honor Jacob Nicholson for doing the right thing. Thanks to Jacob making great choices his school work, grades and positive behavior have impressed his teachers and parents. Ms. Marie Davis who nominated Jacob stated, “I am very proud to nominate Jacob for the Do The Right Thing award. Jacob has turned into the role model that his teachers and parents knew he could be!” You have done a great job, Jacob—keep up the hard work!

Matthew was at the home of his soon-to-be step-grandma with his soon-to-be step-brother Charlie, who is nine. Let me explain, Matthew’s mom and Charlie’s dad are getting married. While Matthew and Charlie were together, Grandma was at the other end of the house. When she heard screaming, she was quickly on her way to them. When she got there it was too late; Matthew had already saved the day! Charlie had been choking on a piece of candy and Matthew did the Heimlich maneuver on him, quickly dislodging the candy. Charlie was again able to breathe, all because Matthew knew what to do in a choking emergency!

So today we honor Matthew Meyers for doing the right thing. Thanks to his quick response to a frightening emergency, another child could breathe again. Robin Hilse, who nominated Matthew and is his soon-to-be aunt stated, “We are all very proud of Matthew for remembering what to do when someone is choking, and remaining calm enough to act on it!”

Alex was lucky enough to spend the night at her grandparents’ home, because of parent-teacher conferences. Grandpa was up in the morning taking the car to the dealer for repairs and was waiting for Grandma and Alex to arrive and pick him up. Grandpa called the house, but there was no answer. During the next call, Alex heard Grandpa’s voice on the answering machine and picked up the phone. Grandpa inquired about Grandma, and Alex looked all over the house for her, without any luck. Then Alex went outside and found her; Grandma was having a low-blood-sugar episode, due to her diabetes. Alex quickly called 911, requesting medical assistance for her Grandmother. The paramedics who responded told Alex that she saved her Grandmother’s life!

So today we honor Alexandra McGee for doing the right thing. Thanks to her recognizing a problem and quick action in an emergency, she saved her Grandmother’s life. Victoria Saksa who nominated her stated, “If Alex had not wondered why grandma was not answering the phone, there was a very good chance her grandma could have died. She saved her life!” Alex, you did an awesome job. We are so proud of you.

Callie was at school when she had to visit the restroom. While she was in there, a girl was in one of the stalls having an asthma attack. The girl was having a difficult time breathing; she was coughing so hard she was vomiting. Being the caring girl she is, she ran out of the bathroom and down the hall searching for an adult. Along the way she lost one of her shoes, but that didn’t slow her down. She found Ms. Battig, the first adult she saw (and who nominated her), telling her that a little girl in the bathroom needed help. Ms. Battig was able to get medical help for the young girl, all because of Callie!

So today we honor Callie Lawrence for doing the right thing. Thanks to her caring heart, a fellow student who was in medical trouble was helped. Sarah Battig who nominated her stated, “Callie is a very kind, caring little girl, I have seen her caring ways on several occasions, even with only one shoe on!” You’re doing a wonderful job, Callie! Keep up the good work.

Jaden was at his home this past November when a storm and very strong winds started. As the storm whipped through the area, it was causing damage to the home in the neighborhood and his house was no exception. The roof on his house was ripped off! Another child, Noah, just four years old, was there when bricks started falling and debris was flying. That’s when Jaden jumped into action! Realizing the danger, Jaden covered Noah with his body to protect him. While both boys were injured, the injuries were minor and both boys are healing just fine!

So today we honor Jaden Hollingsworth for doing the right thing. Thanks to his quick actions, and placing the safety of a little friend in front of his own, the two had only minor injuries. Ms. Jackie Walker, Jaden’s grandmother, nominated Jaden and stated, “Thank God both children had only minor injuries, but I consider my grandson a true hero because he may have saved the 4-year old’s life. I am very proud of him. He is truly a hero in my world!” Jaden, what a courageous act—we are so proud of you!

Bryant was home one evening with his mother and sister when his mother began making supper. She was opening a can when the lid caught on her thumb, cutting it all the way around to the bone. His mother’s thumb was gushing blood, and Bryant immediately asked if he needed to call 911 for an ambulance. Bryant called his grandmother, while mom sat still on the floor, and told her “My mom cut herself, and she is on the floor; hurry and get here.” Bryant was able to stay calm and be a tremendous help. He got more towels for the blood and used the phone charger cord to limit the blood flow for his mom’s arm. He gave his little sister a hug and reassured her by telling her, “It will be okay, grandma is coming.”

So today we honor Bryant Schwent for doing the right thing. Thanks to his courage and quick actions, his mom was able to get the help she needed. His mother, Alyssa Schwent who nominated him, stated, “He knew to stay calm and help the best he could. I could only imagine how scared he was to see his mom sitting in a pretty big puddle of blood, waiting for someone to come and help her. Only one small second did he seem like he was going to freak out; instead, he acted like a little man taking care of his mom.” We are so proud of the little man that you are, too!

Anastasia is a great student at school, and a wonderful daughter and big sister at home. Anastasia’s mother endured a major medical issue last summer, and Anastasia stepped up to help. She is the oldest, and has two younger siblings whom she helped care for, along with helping around the house, while her mother was recuperating at home. Anastasia also helps at school, often with the younger children during morning breakfast, before school has started. Anastasia has also requested to sit next to a younger student who needs a lot of redirection and assistance, simply so she could help the student.

So today we honor Anastasia Terry for doing the right thing. Thanks to her caring ways and service to others, she has helped her family and her schoolmates. Her teacher, Rosemarie Schelling who nominated her stated, “Not only does Anastasia assist others frequently throughout the day, she does so graciously. She truly deserves the Do The Right Thing award for her incredible character and commitment to helping herself and others do the right thing!” We think so too, Anastasia. Keep up the good work!

Brayden has awesome friendship skills! He decided to use those skills to assist a classmate who was having a hard time staying on task and controlling his outbursts. Brayden is now his friend; and he is a good friend. He uses a calm voice after an outburst, telling his classmate, “Please don’t throw your chair and pencil box around the room.” which helps calm his friend and stops the inappropriate behavior. Brayden thanks his buddy for doing the right thing. By using his words and actions, he has shown him what a good friend will do to help a friend in need!

So today we honor Brayden Wear for doing the right thing. Thanks to his kindness and friendship, a fellow student is learning what a true friend is. Sherron Walker who nominated Brayden stated, “Brayden has been a positive influence on his classmate, and given him a sense of inclusion and acceptance, which has helped decrease the episodes of angry outbursts and aggression, and has made his classmate a happier person!” We are proud of you, Brayden! Great job on being a great friend!